Stefanos Tsitsipas is undoubtedly one of the most exciting players on tour. This 21 years old player is labelled by many to be the next guy up to have success at the highest level. Tsitsipas makes use of every opportunity to attack at the net and plays an aggressive brand of tennis.

He performed impressively in 2019 by winning the ATP Tour finals and now, people can’t help but wonder when his first Grand Slam title will come. His aggressive style of play from the baseline makes many tennis fans wonder how he gets so much power on all his strokes without losing control.

The basic things that help his gameplay are his talent and the perfect racquet (that suits his style of play) that he uses. To know about his tennis racquet, then stay glued to this article, as it is provided to give you detailed information on Tsitsipas’ tennis racquet.

The tennis racquet Tsitsipas uses has a lot of similarities with the new Wilson Blade 98 V7 which he endorses for the public. Both racquets play very similarly and the new model comes with upgraded technology that is supposed to be better overall.

Tsitsipas prefers the feel of the old racquet model, just like most professional players. Thus, he prefers to stick with a Wilson Blade from a few years ago. However, he made some customization to it to suit him more and this has helped to reach where he is today.

The Wilson Blade 98 is a solid choice for Stefanos Tsitsipas because as an aggressive player with a more classical technique the racquet offers him the great power he needs. The Wilson Blade 98 offers more power than classic racquets, even though it is a mix of a traditional frame.

Some merits of Tsitsipas’s racquet, the Wilson Blade 98 are:

The basic demerit of the Wilson Blade V7 tennis racquet is:

The Wilson Blade 98 tennis racquet comes with great features which makes an amazing product and so enhances its performance. These features include:

The Wilson Blade 98 comes with a unique construction, which is the braided graphite and basalt construction. Basalt is a volcanic rock which can be manufactured to give fibers with properties similar to fiberglass.

The combination of the Braided Graphite with Basalt result in an elastic and reactive material.  This feature increases the racquet’s flex. The improved flex of this product increases the ball’s contact with the strings. Thus enhancing feel and offering greater control.

The Feel Flex Technology is an amazing feature of the Wilson Blade 98. This technology involves the strategic placing of the proprietary carbon mapping throughout the racquet’s hoop. This feature results in a more connected-to-the-ball feel while complementing the modern vertical swing better.

It provides the racquet with extra stability and flexibility throughout the swing.

Another feature of this racquet is the parallel drilling which involves drilling the grommet holes to each other to increase string movement. It dramatically increases the sweet spot of the racquet by up to 27%. Ultimately, this results in a consistent and more forgiving string bed response.

Ultimately, it allows for more control and ensures better string durability. The denser string pattern of this racquet enables you to hit more strings on impact. Thus, you get a much more stable shot when playing the tennis game.

Also, the string pattern of this tennis racquet gives flat hitting players better directional control on the court, even though it does not produce quite as much spin as other string patterns.

The older version of the Wilson Blade V7 that Tsitsipas uses is perfect for him as its extra control enables him to bring in his sometimes erratic shots. This racquet will surely help him to increase his control even as he matures as a player. 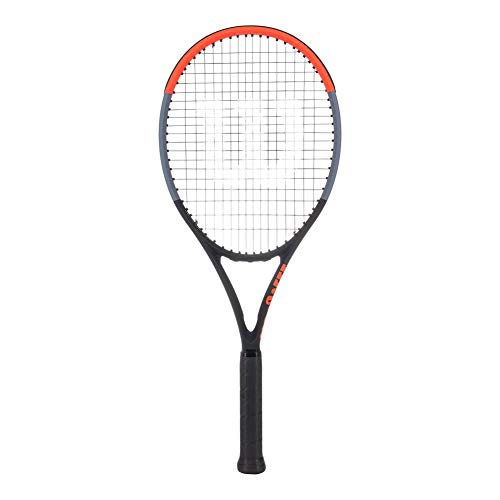 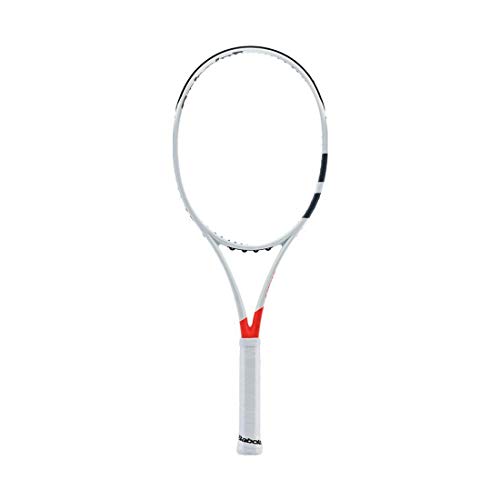 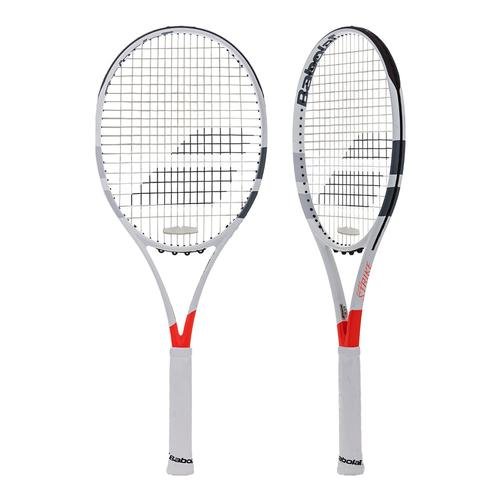