Novak Djokovic is a Serbian professional tennis player currently ranked as the world number one. Many people know him as one of the most outstanding players who has ever lived. As noticed by many people, Novak doesn’t put on a watch when playing tennis like other top players.

However, this does not mean that he has no endorsement deal with a well-known watch company. Most times a watch is seen on his left wrist when he is hoisting another trophy or showing up for an event. So, he wears a watch.

Now, the question is, what watch does he wear? To know the answer to this question and to get to know more about the watch Novak wears stay glued to this review as it will provide you with the details of Novak’s watch.

What Watch Does Novak Djokovic Wear?

Novak Djokovic currently has a sponsorship with the watch company Seiko and so, he usually, wears the Astron GPS Solar. Although he has been spotted wearing several other options from the company.  This Serbian tennis star is one of their top athlete endorsers worldwide at this time.

Seiko is a world-renowned watch brand, which opened in 1881, over a century ago. Since then, this brand has many firsts to its record. Apart from being a watch brand, this company has an interest in metallurgy and mechatronics. This interest has led to its delving into the manufacturing of other products like jewellery, camera parts and other precision instruments.

Since Djokovic mostly wears watches off the court, he tends to switch things up depending on the occasion.

In terms of the most popular ones, the Premier Kinetic Perpetual and Sportura Chronograph are two of his favourites. These watches are classic models from the company which their versatility makes them fit different occasions. Djokovic is a bit of a stickler for ensuring that his outfits match; thus, he owns different variations of the same watches for any occasion.

The watch company, Seiko, stated at the launch of their partnership with the tennis star player, Djokovic that he will wear different watches selected for various aspects of his life. So, when he is training, he wears a Sportura Chronograph while he wears a Premier Kinetic Perpetual watch when attending an evening function. He wears a Seiko Divers watch when Djokovic enjoys life away from the tennis court.

However, his favourite model is the Seiko Astron. This model has a limited edition with Djokovic’s name on it that has turned into a hot collector watch. The watch Djokovic usually wears, Astron GPS Solar, which was created for him uses GPS networks and solar power to adjust itself automatically to any time zone on Earth. This means Seiko has accounted for Djokovic’s world travels.

The latest model of the Seiko Astron Novak Djokovic watch is the 2020 Limited Edition. According to standard Astron SSH019J1, the limited-run watch is designed to celebrate both the Serbian and Japanese flags’ Thus,  both colours are on the watch.

The following are the merits of Seiko Astron GPS watch:

The basic demerit of the Seiko Astron watch is:

This new Djokovic Astron is a pleasant-looking timepiece; this is as a result of several bespoke styling cues it comes with. The features include:

As rightly said, the Seiko Astron Novak Djokovic 2020 Limited Watch was designed to celebrate both the Serbian and Japanese flags. So the red and white colours shared by both flags are used for accent colours on the new watch while the dial is finished in a gorgeous shade of blue, symbolizing the blue in Serbia’s flag. This colour in Japanese culture represents the notion of victory.

The striking white is found on the UTC indicator ring and sub-dials, and the splashes of bright red are seen on the tip of the second hand, and also the one and nine numerals of the UTC ring, representing the Serbian and Japanese time zones.

Also, the blue ceramic bezel is outlined with a thin red line for a subtle appeal.

The GPS Solar Caliber 5X53 Dual-Time powers the Seiko Astron Novak Djokovic 2020 Limited Edition Watch.  This feature connects up to twice a day to the GPS network; when the dial detects sunlight.  It maintains the watch’s precision anywhere in the world.

This property also enables the watch to adjust automatically to Daylight Saving Time. A simple push of a button automatically moves the hands to the correct local time when the wearer changes time zones. Moreover, the wearer can change the main time display immediately from home to local time and back.

This watch comes with a stainless steel case which measures 42.7mm in diameter, and 13.3 mm thick with the case finished with a super-hard coating.

The watch is water-resistant to 100 meters and magnetism-resistant to 4,800 A/m; also, it has a dual-curved sapphire inscribed with a Novak Djokovic signature.

Moreover, this watch comes on a three-link steel case, with an easy-to-adjust, three-fold push-button clasp.

In all, there are varieties of Seiko watch that Novak Djokovic wears, with his favourite being the Seiko Astron watch. Considering the different mind-blowing features that this watch comes with, it is undoubtedly a valuable product that will serve you well.

The GPS Solar feature of this watch makes it a perfect choice for Novak Djokovic and as well as international travellers because you get the current time based on your location. At the same time, you get to charge the watch from almost any light source, even sunlight.

Moreover, the watch’s Power Reserve Indicator enables you to know how much energy your watch has as well as when it should be charged or winded.

These features and many more make Novak Djokovic’s watch a good buy for you as you will get lots of value from it. 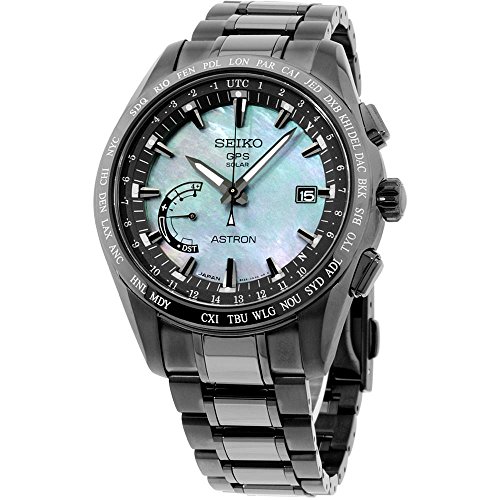